Remaining in the Management Board with Martina Dalić are Davor Doko and Ljiljana Šapina, and the new board members are Milan Tadić and Ivan Ostojić. The five-year mandate of the new Management Board begins on 24 February 2022 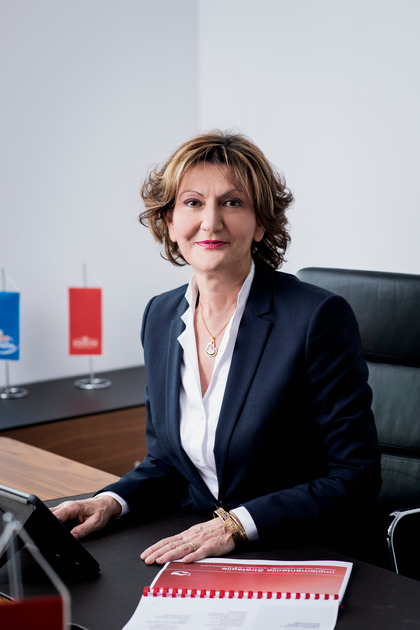 “Today, at the proposal of the members of the Supervisory Board who represent the largest shareholders, pension funds and the state, we appointed a Management Board that will lead Podravka through the next five-year period starting on 24 February 2022. The fact that we have completed the process and made our decision on the composition of the next Management Board just a month before the expiry of the current mandate of the Management Board is the result of the great focus of the Supervisory Board to consistently work towards improving the quality of corporate management and achieving the accepted global standards for companies of Podravka’s size and complexity. I would like to congratulate the Chairperson of the Management Board and all appointed board members. We expect the new Management Board to achieve the goals of the strategic plan for the next five years, particularly concerning continued company growth, both organic and through acquisitions. We expect more intensive investments in raising the overall technological level of production processes, as a prerequisite for greater innovativeness and maintaining high product quality. The Supervisory Board also expects the Management Board to continue investments in improving knowledge and strengthening competencies of employees at all levels, with the aim of raising the total level of company knowledge. The growth in value for shareholders, the motivation and loyalty of employees, and contributions to improving the quality of life in the local community will be the best success indicators of the work of the new Management Board,” stated Chairperson of the Supervisory Board, Želimir Vukina.

Martina Dalić was appointed Chairperson of the Management Board as of 4
February 2021, and with today’s decision, the Supervisory Board have confirmed their satisfaction with her work and accomplishments, entrusting her to lead the company in the forthcoming, full mandate.

“I view the opportunity to lead Podravka for the next five years, together with my colleagues in the new Management Board, as an expression of trust, and just as it was one year ago, for me this is an exceptionally great responsibility. Responsibility to achieve success for Podravka on the global market, and to increase its value for shareholders, but also our responsibility to the local community, through our ongoing advancement of the position and satisfaction of all our employees. Podravka is a Croatian multi-national company, whose heart is, and always will be, in Koprivnica. I congratulate al my colleagues appointed to the Management Board, and wish everyone much success in our work together. I expect that the Management Board will function as a team, focused only and exclusively on the growth and development of Podravka through dedicated and decisive implementation of the development investment cycle that we began several months ago. I would like to thank all the members of the Supervisory Board and all shareholders for their trust,” stated Martina Dalić.

Management Board members Davor Doko and Ljiljana Šapina will remain on the board with Martina Dalić. They were first appointed in February 2017. New members are Milan Tadić, Podravka’s Head Director for the Adria region, and Ivan Ostojić, who is coming from the position of member of the Management Board of the Wüstenrot Housing Trust.

The Supervisory Board thanked the board members to date, Marko Đerek and Hrvoje Kolarić, for their contributions to the company whilst on the Podravka Management Board.

Marko Đerek will now become a member of the Belupo Management Board, which will continue to be led by Hrvoje Kolarić.

Information about the Podravka Management Board member

Martina Dalić (1967) has served as Chairperson of the Podravka Management
Board since 4 February 2021. She has built her rich career and broad corporate
experience in managing large systems in complex environments in both the
private and public sector. She has served in senior state positions, including
Government Vice-president and Minister of Economy, Minister of Finance, State
Secretary and Assistant Minister of Finance, and she was also a Member of
Parliament in the 7th Assembly of the Croatian Parliament. Her experience in the
private sector was built through her roles as Chairperson of the Management
Board of Partner Bank Zagreb, chief economist at Privredna Bank Zagreb, and her international experience as a consultant for the International Monetary Fund.
Martina Dalić holds a PhD in economics.

Davor Doko (1974) has been a member of the Podravka Management Board
since May 2017. He began his professional career in 2000 in the Assets
Department of Zagrebacka Bank, where he participated in establishing a
company for investment fund management. He joined the team of AZ Compulsory
Pension Fund in 2022, and served as a procurator and chief portfolio manager,
while in 2006, he became a member of the Management Board of Allianza ZB, a
company for the management of the AZ compulsory pension funds. He holds a
degree in economics from the University of Zagreb.

Ljiljana Šapina (1964) was appointed a Member of the Management Board of
Podravka in February 2017, and has been with the company since 1984. During
her 38-year career in Podravka, she gained experience in a number of manager
and director positions within the company, in the departments Accounting and
Finance, Retail, Gastro Sales, Frozen Programme, Joint Market Affairs, and
Export Preparations. In 2012, she was director of the Import-Export Logistics
service, and in 2015 took on the position of Head of the Import-Export Logistics
department. She holds a degree and Master’s degree in economics from the
University of Zagreb.

Ivan Ostojić (1973) joins the Podravka Management Board from the position of
member of the Management Board of Wüstenrot Housing Trust, and since June
2021, was a member of the Supervisory Board of Podravka. He began his career
in 1997 in the Ministry of Finance, in the Directorate for the Financial System and
Capital Market, and has been employed at the Wüstenrot Housing Trust since
2001, first as Head of the Loans Department and procurator, and in 2007 he was
appointed a member of the Management Board responsible for sales and
marketing, risk management and back office of treasury and loans. He received
a degree from the Faculty of Tourism and Foreign Trade at the University of
Dubrovnik, and a Master’s degree in political science from the University of
Zagreb. He is a member of the Supervisory Board of Luke Ploče d.d.