Podravka provides for health of pupils in elementary school

To the invitation of minister Željko Jovanović, Podravka presented the project of Unique Menus in elementary schools.

Research on nutrition state in pupils aging from 7 to 15 shows that 11% in average have an increased body weight, and 5.5% is overweight. Obesity is increasing, particularly in some cities where the number of obese children in the last five years has doubled.

The analysis of eating habits of pupils shows that children do not eat regularly, less and less eat at the school cafeteria, particularly pupils in higher grades, and almost half of the children having classes in the morning skip breakfast.

In order to advance the eating habits of children and to introduce healthier school meals, in cooperation with the city of Koprivnica Podravka started a project of Unique Menus intended for pupils in elementary schools. On the one hand the goal is to standardize the menu compliant to the eating habits of children of elementary school age, and on the other to get the children acquainted with as many different and healthy victuals and imaginative meals as possible. 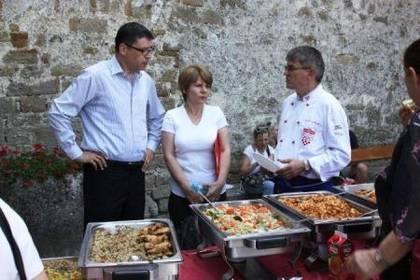 After this project of Unique Menus was supported by the Ministry of Health and after it has been implemented in elementary schools in Koprivnica, Podravka presented the project as part of the course "Media and Health" in Grožnjan, as initiated by the minister of health, education and sport Željko Jovanović. Organizers of this course were the School of public health „Andrija Štampar", Croatian Network of Healthy Cities, Croatian Journalists Association  - Assembly of Journalists in Health and Medicine and the association Difraction.

Unique Menus is a joint project of Podravka and the city of Koprivnica, and once again Podravka has shown to the media and the attendants of this course its social responsibility, showing how good eating habits are acquired since early age.

Apart from the detailed information on the project of Unique Menus intended for pupils in elementary schools, the attendants of this course also had the opportunity to try some of the meals which are included in the school menus in Koprivnica.

Podravka participates in this project with high quality products, which confirms the choice of victuals in the menus, and which have additionally advanced the menus in schools in Koprivnica. Meals prepared in Grožnjan thrilled the attendants of the class, but also the minister Jovanović, who gave his support to this project.

Podravka's goal is to advance the eating habits of children much further than Koprivnica. It is therefore to be expected that the Unique Menus as designed by Podravka's nutritionists are to be constituent part of eating not only in Koprivnica, but also in other cities of Croatia.