After 22 years the Croatian player again took the winning cup of this most prestigious tournament in this region. 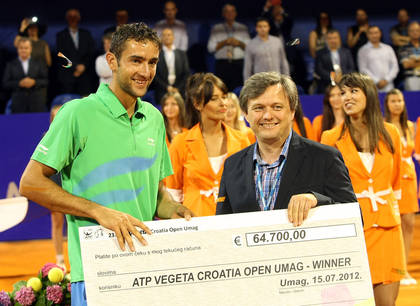 Marin Čilić is the winner of this year's Vegeta Croatia Open Umag tournament, and so after 22 years the Croatian player again took the winning cup of this most prestigious tournament in this region. Croatian President dr.  Ivo Josipović presented the winner with the cup, and Podravka Management Board president Zvonimir Mršić with the check written out at EUR 64,700. Full ATP stadium was thrilled with Marin's victory over Marcelo Granollers from Spain, and numerous reputable public persons congratulated on his victory to this player who is currently holding 15th place in the world.

Among them was also Blanka Vlašić, who was a special guest of this tournament. Along with his father and coach Joško Vlašić she met with the members of Podravka's Board, and then she played with children at the Lino play corner. She distributed to children her autographs and the bottles of Studena water, while Lino the bear prepared Lino pillows, cereals, for them.

Apart from the enormous gastronomic contribution to this tournament ATP Vegeta Croatia Open, owed to Podravk'a cooks and culinary promoters, Podravka also enriched the contents of this great sport event with amusement as well.